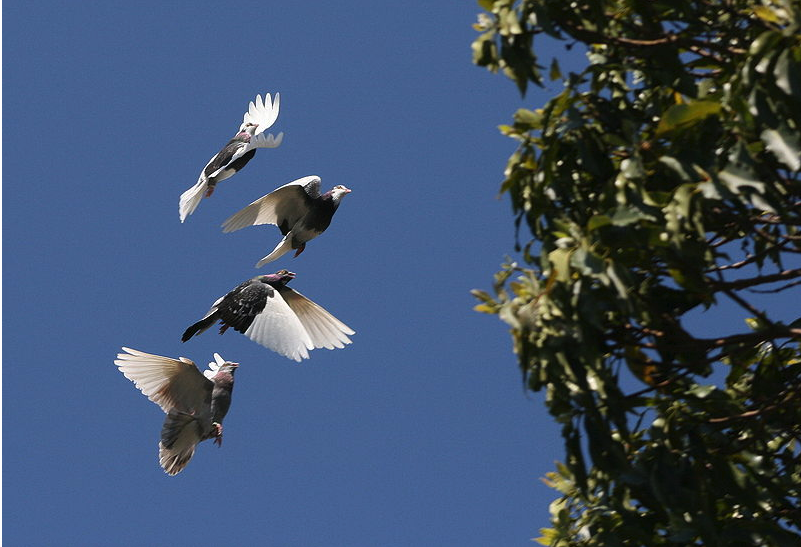 The day started well, clear blue sky and the anticipation of a leadership coaching meeting. On the way to the meeting, I stopped at a car wash with the thought to kill two birds with one stone, as they say, to prep for my meeting while the car had a well overdue clean.

The car wash was close to empty and I found myself sitting inside at a corner table with large floor to ceiling glass windows behind me and to my left.  There was a large open double door close by.  It was relatively quiet and I found it easy to focus on my meeting preparation.

I had only been there for a short time when all of a sudden there was a flash of movement to my left followed by a very loud bang.  A large bird hit the ground right next to where I was sitting with feathers floating to the ground around it.

It was a totally unexpected shock and it took a moment to work out what had happened.  My mind flashed back to the moments preceding the bang and I had an inkling of two or three smaller birds chasing the larger bird.  They were at full flight and the target of the chase (a feral pigeon I think) took a fateful last-minute swerve through the open car wash door to avoid the chasing birds, not realising that the wall behind me was thick glass.  Flying at full speed the bird hit the glass with catastrophic results.

Jumping out of my seat I took a step towards the bird.  It was alive but with neck twisted misshapenly it lay there, unable to move. Its eyes were alive and weirdly with no one else nearby I swear I could hear it slowly breathing.  And so I found myself alone with this mortally wounded bird.  Time and space seemed to shift around us and I stayed with the bird for its last moments as it took a final breath. I felt its life force depart – it was lifeless now.

Unexpectedly I found myself strangely moved, not by this common introduced bird’s death but by the witnessing and sharing of the sacred moment of its dying.  I had done nothing to aid the bird but I did stay with it as it slowly let go of life.  The witnessing of the moment felt like it was important for the bird.

The moment passed and life reverted to how it was before.  Staff at the car wash appeared and cleaned away the bird.  My car was ready and I left for my meeting.  The experience stayed with me though.  Why such a dramatic event?  What meaning to give it?  I felt a deep connection with my own breath and a calm reverence and gratitude for life in a way that wasn’t present before.

Across our highly experienced coaching team we know the quality of our presence is the most important ingredient that we can bring to any coaching conversation.  Yes, of course, as trained professionals we are responsible for the coaching process and to support our clients to achieve their professional and personal coaching goal and objectives, however, the quality of our presence creates the holding for meaningful dialogue that can unearth new insights and initiate new intentions that carry depth and momentum for life-changing growth.

One of the gifts of witnessing the feral pigeon’s death was revealed in the executive coaching meeting I headed to next.  The quality of presence the client and I were able to create together enabled her to share what she had never articulated before in a safely contained space in such a way that freed her from its hold and allowed her to move positively towards being the leader she aspires to be.  The witnessing of this was a sacred moment.

You can contact me directly if you wish to discuss coaching services. Leading Well is also hosting a Systemic Leadership Training program starting in Jun/2021. Claim your spot now, they are limited!