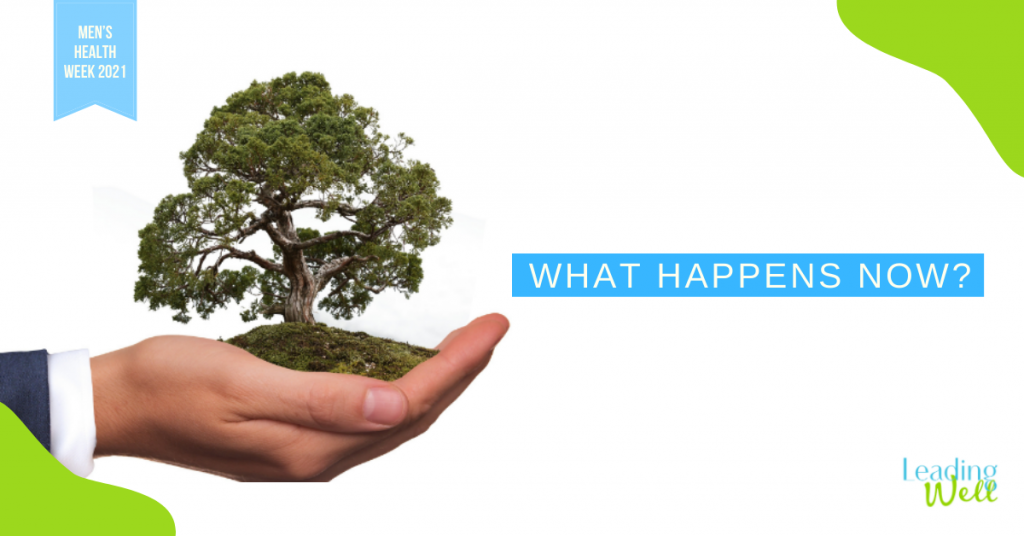 This article wraps us a series of posts published last week for Men’s Health Week 2021, focused on the well-being of male leaders – Board Directors, CEOs, Executive Managers and General Managers.

So what now? – the final part of our Men’s Health Week series

Knowing that men have high rates of some physical and mental health issues (including suicide) and that many of these are preventable, means that we can all take an active role in our own health and well-being. It also encourages us to check in on the men and boys around us. We have also highlighted that the stories in our younger years and continued expectations in our older years give us a picture of what being a ‘real man’ means that we feel we need to live up to. Joe Ehrmann, NFL coach said “The three most destructive words that every man receives when he’s a boy is when he’s told to ‘be a man’.”

We referred to some fascinating research into the masculine contest culture  and that’s supported by other research; an Australian study (The Men’s Project and flood, M (2018)) on the pressures of fitting into ‘The Man Box’ showed that young men who most strongly agree with the rules of The Man Box report poorer levels of mental health, engage in risky drinking, are more likely to be in car accidents and to report committing acts of violence, online bullying and sexual harassment. A large analysis of 20,000 men in 80 studies showed that men who conformed strongly to masculine norms tended to have poorer mental health and less favourable attitudes toward seeking psychological help (Wong et al (2017).

So what now? Men in leadership positions, whether that be as a Board Director, a CEO, a General Manager or a mid-level manager, may need some time and space to reflect on their own well-being and how best to support the well-being of others. They may feel an urge to explore these issues further. There is a lot to unpack here. Of course, being silent is a choice. Our call to action is to have voice and become more active.

We believe it is time to create a space for men in leadership positions to come together to talk through some of these issues and hear from others. Contact me if you want to be part of these next steps or  if you want a quick conversation about taking this further for yourself, your organisation or your sector.

If you want to know more about working with us:

At Leading Well our purpose is to raise wellbeing and performance through enlightened leadership. To achieve this, we offer practical and proven ways to a wide community of leaders to improve their creative competencies for positively contributing to personal, collective, and universal wellbeing. We believe in taking in multiple perspectives including a ‘zoomed-out’ view of the healthy functioning of the organisation and a ‘zoomed in’ view to ensure the wellbeing of the leaders of the organisation. We work with our clients to form and use this systemic view of their organisation, uncovering the hidden and raising the un-discussables.